Photo by Philippe Donn on Pexels.com

I’m a stubborn human being.

That seems very fitting and rings true for me.  I decided I have about 20 minutes before my friend texts me back and I hop in the car with my dog to head to Oxford and have a quarantine hang-out with an old colleague from my last job.  I figured, why not take that time to sit back and tell you my story I intended to tell the night I posted after I impulsively bought my Mac refurbished MacBook Air and received it in the mail.  They delivered it to the wrong house, so of course that wasn’t just “spare change” I had lying about, in fact, it was a credit card purchase to which I will be paying back for a good while.  It was needed.  I realize I’m using the misdelivery as an excuse to why I faltered from my original idea in writing that day, but I’d like to think that my mind just had other plans for sharing that day. 🙂

What better model to show off this beaut than my favorite being in the entire world? Thanks for modeling, Mok!

Annnnd my friend has already text me…. so this won’t be as long as I’d like, but nonetheless, I have a few extra minutes while my clothes finish drying to write.

My higher power has a sense of humor.

Which will open this story from 10 years ago… but first, let me show you what I’ve been doing for the last hour.  I received a Christmas gift in 2017 from a good friend of mine, Bonnie (college sorority sister and lifetime friend). Last I spoke to her I had had a conversation with an agent as a reference in her behalf for being a foster parent,.. I think she’s looking to adopt. Our mutual friend (and sister) who lives down the street from her got married I guess about a decade ago too! (Wow, time flies!).  This friend lost her mother suddenly a year or so ago,… and we buried and celebrated her mother’s memory on New Year’s that year.  A few months later she found out she was pregnant….and Adelyn Grace was born.  Katie was born for the job of motherhood, and while it saddens me that I have yet to meet sweet baby Addy Grace,… life was not in my favor to be able to attend her 1 year birthday a few months back. I will find a way to make up for this absence of mine in the future. Coronavirus is my new excuse. I feel like a horrible friend.

So Bonnie gifted me this book Christmas 2017. I initially opened it thinking that it would have tutorials for drawing, but nooooo…. this book is more amazing than that, in the fact that it consists merely of blank pages with a tiny “instruction” of what you are to draw in the space.  I vowed at the time that I would MAKE MYSELF go in order and not do what my impulsive side of me wants to do and skip around only drawing what I want.  This has been a challenge, and while I’m only 49 drawings in (oh boy!) I have kept to my initial vow to myself.

So anyhoo~ today I opened up this book, despite seeing all of my quarantined friends who are deep cleaning and organizing and being responsible adults… I justified, “I’m still working, and this is my time off so I want to do something fun!” as my reason for avoiding adult responsibilities. 🙂 Again, I’m full of character defects and quite aware.  I do my best to work on them little by little, however, today I just flat out ignored that and decided to draw a bit for “me time.” Don’t get me wrong, I also washed a load of clothes, and my place is messy, but not the usual complete WRECK that it is… so there, further JUSTIFICATIONS for you and me. Haha. Man oh man do I need to do some more work on myself… calling yourself out and recognizing these defects of character and behaviors is a huge accomplishment, but not if you are me and have mastered that skill already and procrastinate growing further by confronting each one in the moment it arises. *sigh*

So I’m sketching along this evening and laughed after I realized that the book is eerily and humorously reflecting what’s going on right now, which I only realized after completing the drawings: 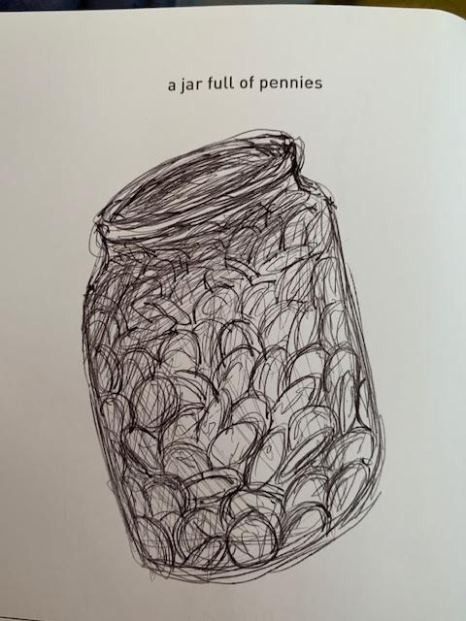 I’ll let you fill in the predictions yourself as to why I thought this was funny and an accurate representation of what’s going on in life right now.

My Higher Power has a sense of humor

And if my life was a genre, I’m pretty convinced it would fall under tragic comedy

So I’ll do my best to go through the BIGGEST attention-getter from my higher power in my life… because again, I’m stubborn, and a lot of times think that I’m truly in control and know what I’m doing.  Every time I get to that frame of mind, my higher power jolts me back to reality and reminds me that truly, I am powerless over everything outside of my response to situations.

Time travel with me for a moment.

Approximately 10 years ago I was standing in my kitchen/bedroom of the “shack,” as I call it, that I lived in at the time.  Reality is that this was my grandmother’s old art studio from when she was living, located behind her house.  It was literally two rooms,… a kitchen/bedroom (Yes, my bed was in my kitchen) and a living room/bathroom (teeny tiny bathroom with enough space for a sink, commode, and stand-up one-person shower).

I was copying my S.T.A.I. (Where my teachers at!? You guys know what that horrendous thing is!) from my previous semester, getting ready to go into my last semester of college which was Student Teaching.

It’s important to understand that I was not pursuing a degree in Elementary Education by my own aspirations and desires, but rather I was choosing a degree that my parents wanted me to have.  I initially started college in Art, and hoped to obtain a degree in graphic design.  After my parents told me, “You’ll never make it as an artist,” my younger version of my ears heard, “You’re not good enough and we don’t believe in you.” I realize in retrospect that isn’t what they meant, and am glad my journey happened as it did in the long run. I then switched majors to English, and soon after after push from my parents, I switched again to Elementary Education.

I had a professor in one class where we had to organize our notebooks EXACTLY the way that was instructed,.. precise, in order, organized just as she asked.  I remember having great difficulty finding things in this notebook and her asking me if I really thought I was choosing the right career path.  This infuriated me and fueled a fire in me to push hard and prove her wrong by showing her I was capable.

So I’m standing there coping a 400+ page STAI (student teaching assessment instrument) in my kitchen/bedroom and I’m so grumpy about it all. I hated it. I HATED IT.  I remember kicking off my tennis shoes and starting copies of 1 page at a time (All I had was a basic scanner printer, so I was scanning and printing each individual page. Back then there wasn’t another way). I said out loud as soon as I kicked off my tennis shoes,  “Well, I guess I’m going to be a teacher and there’s nothing I can do about it…”

Guess what happened next?

This reminds me of one of those funny videos shows where they pause the clip and you have to guess what happens next, but usually you’re WAY OFF.  Same for this situation.

I kid you not.  I was literally struck by lightening.

People ask me all of the time, “What did it feel like?” which I prefer over “Did it hurt?”
“Hell yeah it hurt!”

Everything slllooowweedd doownnn. Very slow-motion.  I remember the room being so bright and spinning in slow motion toward my bed and seeing my laptop (not plugged in or anything) which was shooting orange sparks. Again, very slowed down, so imagine the embers from a sparkler or if someone was grinding metal, only in slow motion… those orange sparks…. they were coming out of my laptop.  I also remember excruciating pain and my eyes being so open and wide, I imagine if someone would’ve seen my face it would resemble a deer in headlights.

And then everything returned to normal speed… I remember thinking that I was paralyzed because I couldn’t feel my legs. Somehow, however, I managed to stumble and run (hooray for not being paralyzed!) barefoot across the yard to my 2005 silver Ford Escape and driving off so shaken and in shock (Ha! Punny!)… out driving in the middle of a tornado warning.  Being inside was the LAST place I wanted to be.  I called my parents, half trying to cry, but half still in shock and hearing my dad laugh in the background saying, “Let me talk to her, I want to make sure she’s alive.”

My feeling in my legs came back over the next few hours.

I returned later and remember looking at the sign I’d put up on the inside of my door, I can’t for the life of me remember what it said, but I remember thinking, “Okay okay okay, I’m listening, I’m wrong, you’re right,” in regards to talking to God.

And guess what?  That was the opener for the most horrible experience student teaching I could’ve ever asked for. I got the stomach virus TWICE, and worked under a teacher who I later learned was Bipolar and off medication and going through a life crisis, so no matter what I did/didn’t do, I was wrong. It was horrific. I had kindergarteners cuss me, spit on me, and say, “Ms. Resa, you aint nothin’ but a child.”

It took me an extra week to get my hours, and I wouldn’t let that teacher “fill out the evaluation later, just sign it blank.” And on my last day I mentioned possibly going into counseling and hearing her laugh saying, “You think you can make it as a counselor? That you can just do whatever you want?”

Not a school counselor either.

I graduated 2.5 years later with my M.Ed. and went further to obtain my N.C.C. and l.P.C. and have been practicing counseling for 10 years as of 2020.

I wasn’t a teacher, not in the way I thought back then at least.  I’m a healer, a helper, and a walking miracle. I am capable of being and doing whatever I want to do.

Okay, sorry to cut it short, but my friend has blown up my phone for the last 40 minutes. My baaaaad.  I better head out.

iThere are no comments

Begin typing your search above and press return to search. Press Esc to cancel.